Ask any dog owner and they will let you know, there is nothing quite like having a dog by your side. That being said, there are also times when problems occur and it can make it both frustrating and challenging to be a dog owner. Some of those issues may display from a very early age but others may develop over the course of time. One of the problems that many pet owners have to deal with is an aggressive dog. What can be done to handle the situation?

As far as behavioral problems in dogs are concerned, aggression is a common and totally unwanted issue. When a dog is aggressive, they may show it in many different ways, including guarding their territory and perhaps even trying to harm anyone who comes near them. In addition to harming strangers, some aggressive dogs will show that tendency toward their owners and that leads to a whole other level of issues. 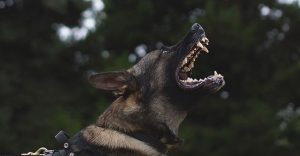 If you have a dog that has shown aggressive tendencies but does not show them all the time, this may be a matter of concern as well. It can be difficult to tell for sure when they are going to show those tendencies again. In addition, you may find that they stop and start these aggressive tendencies and there may not be a specific trigger that really allows you to see what causes it to happen or what you can do to stop it.

Something else that really needs to be kept in mind is the fact that most dogs are not naturally aggressive. Perhaps you have a dog that has been passive most of his life and relatively calm but suddenly, he is displaying aggressive behavior, perhaps even snapping or biting. This may actually be a problem with their health, as aggression is one of the ways that they display the problem outwardly. If you have a dog that suddenly becomes aggressive after not being aggressive, speak to a veterinarian about the possibility of a dog illness.

As far as treating the problem with aggression, this can be a rather tricky situation. Sometimes, it simply is not possible to completely cure an aggressive dog but you can help to limit their exposure to any triggers that may lead to the aggression. When you have a dog that displays aggressive tendencies, you are always at risk of having those tendencies come to the fore. Even if the dog is on their best behavior for quite some time, it may display itself suddenly and perhaps even without warning.

Dealing with a dog in a proper way, training them regularly and stopping the triggers whenever possible are the best ways for you to deal with the aggression. That being said, it is also very important for you to take responsibility and not to put the dog in a situation where any aggressive tendencies would cause harm to you, your family or anyone who was nearby.